As an exercise in data science, I started to work with a radio playlist dataset. Here in Austria, there is a radio station FM4 (fm4.orf.at), which plays a large variety of music over the week from alternative to electronic and local bands. One of its programs is called Sunny Side Up, which plays “The perfect music for your Sunday brunch” (according to its website). Basically, it is a mix of relaxed music, e.g. Kings of Convenience, Feist … etc and sometimes electronic tracks from Daft Punk and Soul classics.

Since I really enjoy the show, I wondered if I could create a graph map of the different artists played over the years on this show. Something like the Twitter graphs you see from time to time were different topics and persons form clusters and you get more insight into these “groups”. An excellent talk for that topic can be found here.

Taking the playlists from the years 2007 to 2016 and grouping together artists played on the show and close to each other, I was hoping to see something similar. Keeping things simple only artist that were played more than 6 times, had been considered in the set, which leads to a total of 845 artists. To make those unique was quite a bit of hard labor since the tagging was not consistent and I am pretty sure that there are still minor errors.

Sadly, I was not able to see such clusters, instead, the graph was always nicely packed and around the major players (artists that are “heavily” played like Feist) small groups occurred, while most of the other artists were spread all over the place (The following graph was created with gephi ) Like: 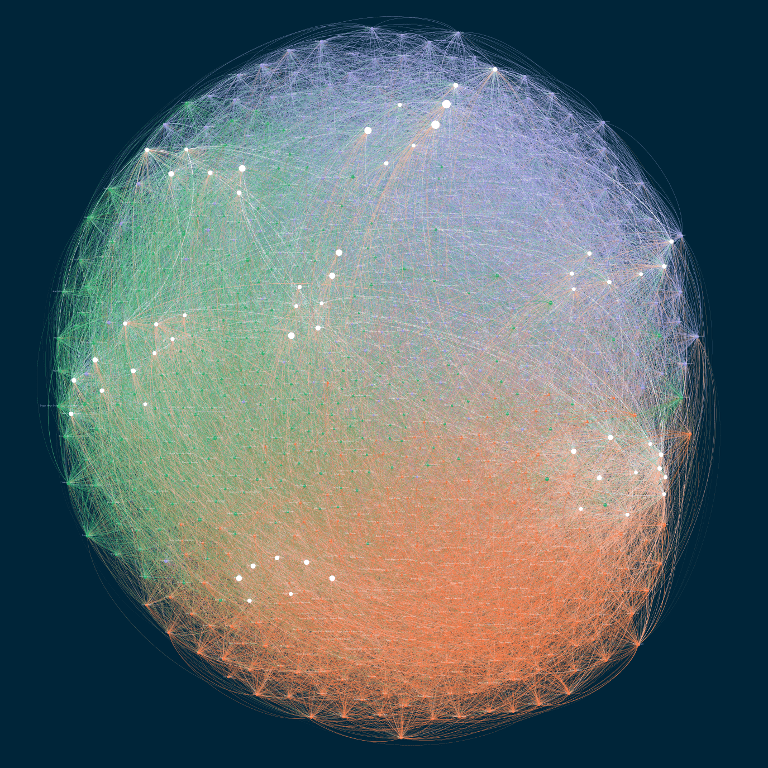 To make at least something artistic with the result, I created a star map-like graph of the network with fictitious star constellations: 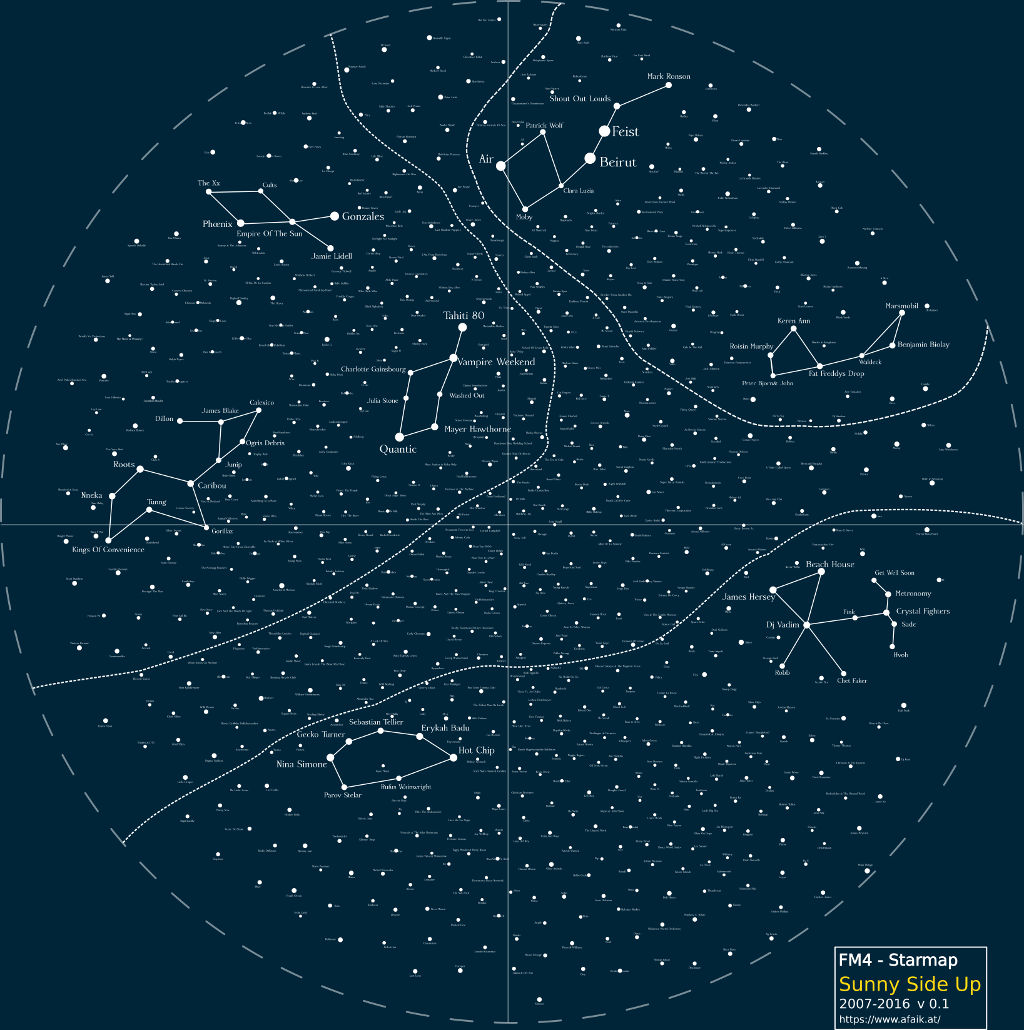 A larger version can be found here

For the connected constellations, the label and node sizes are proportional to their number of plays in the dataset. Hence the more they got played, the larger they are appearing on the map. Each “star” in these symbols was played at least 30 times between 2007 and 2016. For the small stars, only the node size is proportional to their counts. As an additional remark, the connected symbols were manually positioned, the rest was moved via the gephi Force-Atlas method. Hence do not expect a highly accurate clustering result in that graph.

Of course one does not have to stop here and can merge the edge-like result from above with the star map: 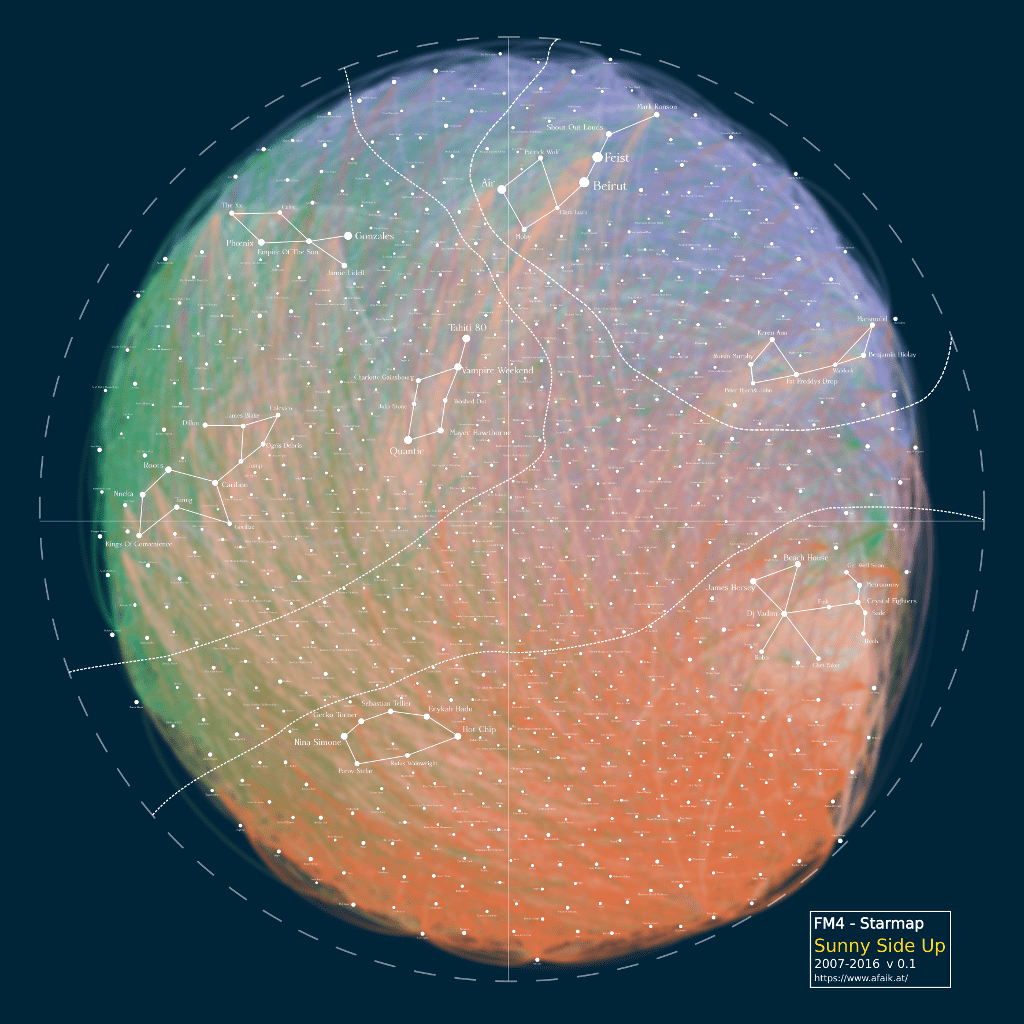 A larger version can be found here

That is only version 0.1 of that project. I hope you enjoy the result. Stay tuned!

Found an error or you have something to comment? Drop me a line!